Tom Crosley is a nationally recognized leader in personal injury law. He received his bachelor’s degree from the University of Texas in 1988, and his law degree from the University of Houston in 1992. He was admitted to the bar in the State of Texas in 1992, and is also admitted to practice in the United States District Courts for the Northern, Southern, Eastern and Western Districts of Texas, as well as the United States Court of Appeals for the Fifth Circuit. Prior to forming the Crosley Law Firm, P.C. in 2005, he was a partner with Branton & Hall, P.C. in San Antonio, where he worked for ten years. He began his legal career in Houston as an associate at Brown McCarroll, LLP. Contact Tom at [email protected] Mr. Crosley is “AV” rated by Martindale-Hubbell, and is Board Certified in Personal Injury Trial Law by the Texas Board of Legal Specialization and is board certified as a Civil Trial Advocate by the National Board of Trial Advocacy. In 2001, he served under appointment by the Bexar County Commissioners Court to the Advisory Board for the Bexar County Dispute Resolution Center and he served in that position until 2006.

Mr. Crosley has tried more than 50 cases as first-chair trial counsel, nearly all of them from the plaintiff’s side of the docket.

Mr. Crosley’s docket of cases includes personal injury and wrongful death cases arising from automobile and trucking accidents, defective products, medical malpractice, and related areas.  In 2006, 2010, and 2016, he obtained one of the 100 highest personal injury verdicts in the nation, as reported by American Lawyer Media. In 2018, he obtained the #2 and #3 highest injury verdicts in Texas against an automobile insurance company as reported by TopVerdict.com.

In 2022, he was named to the Texas Super Lawyers list for the 17th consecutive year. U.S. News & World Reports also included Mr. Crosley on its Best Lawyers list in 2021.

He is also an active member of numerous legal organizations, including:

Mr. Crosley is also a Life Fellow of the Texas and San Antonio Bar Foundations and is a member of the State Bar of Texas, The State Bar College, and the American Inns of Court.

Since 2003, Mr. Crosley has been named each year to Who’s Who in American Law, as published by Marquis. In 2004, he was named a “Rising Star,” a recognition given to the top 2.5% of lawyers age 40 and under. He has since been named a “Texas Super Lawyer” in 2004 and every year from 2006 to the present as published by Thomson Reuters; this distinction is based on peer recognition and professional achievement and is limited to the top 5% of attorneys. Since 2013, he has repeatedly been named one of the “Top 50 Attorneys” in Central and West Texas (out of more than 20,000 attorneys) by the same organization.

Mr. Crosley frequently serves as an author and speaker for legal seminars on litigating traumatic brain injury cases and other topics relating to personal injury trial law. He has given more than 60 speeches and presentations at continuing legal education seminars throughout Texas and in other states as well. Many of his cases have been covered by news affiliates for ABC, CBS, NBC, FOX, and more, including one series of cases that was featured on the national program, Inside Edition. In particular, Mr. Crosley is a staunch advocate against drunk driving, and often volunteers his time to handle these cases pro bono.

A drunk driver killed a beloved father and severely injured his wife. Our clients received one of the top 100 jury verdicts in the nation that year, giving them the closure and justice they needed.

Our client suffered a severe brain injury when he was run over while riding his bicycle. He was in a coma for several weeks and will require supervision for the remainder of his life. The settlement funded a trust that will provide for his life-long needs.

Our client suffered a mild traumatic brain injury from a head-on collision with an 18-wheeler truck tractor. The case later settled for $6 million. This is a story of results, of digging deeper, of seeking out medical expertise, and of the attorneys at Crosley Law Firm doing everything in their power to make sure justice was delivered to their client.

Our client, a married father of two young children, was killed in an explosion on an oil field drilling site in West Texas. We filed a lawsuit against several companies that caused or contributed to dangerous conditions that led to the explosion.

Our 16-year-old client sustained a traumatic brain injury at an indoor trampoline park. At trial, we won a record-breaking verdict against the negligent company. The case later settled for $5,250,000.

A grieving mother turned to Crosley Law when a truck driver tried to blame her daughter for a fatal wreck. We uncovered dashcam and GPS data that proved the trucker was fully to blame for the crash. Our team also documented the driver's long history of reckless driving, trucking company negligence, and our client's profound losses, resulting in a $9 million settlement. 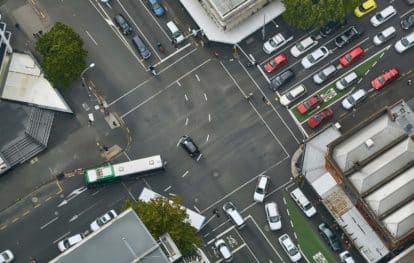 Who Is At Fault in an Intersection Accident?